I attended the CAC meeting the evening of Wednesday 27th November at Platypus. This was an opportunity for the members of the CAC to tour the refurbished spaces which are now offered for leasing. They have some tenants already signed up and will be conducting fit outs and moving in early 2020. The gate house has been turned into two units one upstairs and one downstairs, fyi they are expecting in the range of $900 per week per unit.....

A review of the trust is underway and if anyone has something to add this will need to be done before the 23rd December.
More information can be found https://www.environment.gov.au/about-us/shft-independent-review
The one thing that was highlighted at the last meeting by members of the CAC was the lack of information on display about the site pre submarines and its aboriginal heritage.
Sydney’s newest waterfront destination, Sub Base Platypus in North Sydney, has welcomed its first two tenants – Australian Sailing and SLR Consulting Australia Pty Ltd (SLR).

Australian Sailing, which is Australia’s peak body for sailing with more than 360 clubs nationally, will relocate its administration and training facilities to the Fleet Workshops (Building 10), bringing it closer to the local sailing community.

Meanwhile, SLR – global leaders in providing environmental and advisory solutions, including acoustics to waste management – has chosen the Submarine School (Building 2) as the new home for its Asia Pacific Head Office and Sydney-based operations.
The revenue from Harbour Trust tenancies is directly reinvested into our network of protected places, allowing us to work towards improving public access to once inaccessible sites that have natural and cultural heritage significance.
https://www.harbourtrust.gov.au/en/our-news/sub-base-platypus-secures-high-profile-tenants/
Torpedoes (pop-up café)
Need to 'sink' your hunger pangs or coffee cravings? Head to Torpedoes! Located alongside the pocket playground at Sub Base Platypus, this new pop-up café offers locally roasted coffee as well as a selection of breads, sandwiches and pastries.

Note: Due to site construction, Torpedoes will be operating on a reduced menu, which includes coffee, pastries, snacks and small lunch items. Wine, beer and cider is available for purchase from 12pm. From Monday, 9 December 2019, Torpedoes will operate 7 days a week.

General
•           SHFT presented an overview of the work currently being undertaken onsite and the proposal for the Torpedo Factory.

Site Interpretation
•           Assistance offered by SAA to propose, check signage – SHFT appreciated the offer and the SAA will be consulted.

Meetings
•           AGM – Email advice in advance with date, time, numbers etc. plus any special requirements.   Advised that 14 September 2019 was the anniversary of the loss of AE2 and the SAA would like to conduct their AGM and then short memorial service. On site for max 2 hrs. SHFT advised that access would have to be via Kedron Park.  On request, special arrangements may be made for limited access for disabled or our Patron, 96-Year-old Mike Hickie.
o          Note: due to work this could not be approved.
•           Where could they be held – either in Retort Building (If available) or around memorial depending on numbers?
•           Cost – No cost.
•           Use of BBQ and table – Yes though they cannot be booked.
•           Drinks? Alcohol is banned though its use is not envisaged in any SAA organised event.
•           Parking – No parking currently available onsite and in future would be available in the Old Torpedo Factory ~ 40 spaces on first In basis.  Parking below Units is for Sub Base PLATYPUS Tenants.

Scattering Ashes
•           Is approval in advance required? Yes.  Email advice with Name and Rank of deceased plus relationship with Sub Base PLATYPUS, date and time.   Note that the Lower Wharf actually belongs to Maritime Services and not the SHFT.
•           No limit provided it is small ie 10-20. Larger numbers would require approval through SAA and be covered by our Insurance.
•           Memorial Wall – small Plaques for those whose ashes are scattered. Not currently considered and unlikely due to ongoing maintenance etc.   Discussion on a possible Memorial book, though this would have to be considered in the future.

Museum
•           Is there anything planned – Not at present though possible exhibition in Retort Building with agreement of the Director of the Naval Heritage Collection.
•           The holding at Spectacle Island was discussed and the SHFT were keen to visit and view the items on site.  The SAA agreed to liaise and arrange a possible visit, though it has been noted that the SHFT have emailed CMDR Peter Cole for a possible visit.
o          Note. Have since spoken to CMDR Cole and resent him SHFT request for a visit.
MOU
•           MOU between SHFT and SAA is not required.

Download File
Donations to the HMAS Platypus - Commemorative Wall to date  $27,796.07 as at 10/4/2017
On Friday 20 Jun 14 I was privilged to attend a walkround of HMAS Platypus hosted by the SHFT for the Community Advisory Committee.  An incrdible amount of work and clean up of the contaminated soil etc. in all areas has beeen undertaken.  THEIS is behind schedule and should complete the end July 14.  As can be seen from the slides, landscaping has commenced and the roadway has been dug up and replaced.

In August the final stage should commence with the removal of asbestos from building windows and the demolition of the North and South sections of the wharf, leaving approx. the middle 160M.  This should take 3 months.

After this, depends on future funding from the Government or the private sector.

HMAS Platypus was commissioned on 18 August 1967, conjointly with the Australian Fourth Submarine Squadron as the eastern Australian base for the six RAN Oberon class submarines.

Platypus which was referred to as "Plats" by the ships company and was the only dedicated submarine base in Australia. Engineering Workshops, Medical Facilites, the Submarine School, Communications Centre and Administration were all housed at Plats providing the support required for the submarines and their crews to remain operational.

While the submarines operated from the waterfront, the RAN’s torpedo workshops occupied the southern part of the site.

In 1999, HMAS Platypus and the torpedo workshops closed down when the Commonwealth decided to relocate its submarine base to HMAS Stirling in Western Australia.

The site was handed over to the Sydney Harbour Federation Trust in 23 July 2005, and is currently closed to public access while remediation works of the ground contamination and buildings on the site is undertaken. 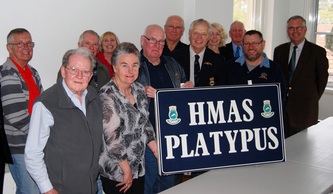 
Stage 1 encompassed the above ground remediation and site preparatory works. As part of the Stage 1 works, the centre 116 metres of the 216 metre long concrete wharf at the Platypus Site was repaired.


Stage 2 involves the excavation and stabilisation of around 30,000 tonnes of Gasworks contaminated fill and bedrock material and the management of groundwater.

Works commenced in mid 2012 with site establishment and the construction of both permanent and temporary structures required undertaking remediation works on the site. The treatment works are expected to be completed by August 2013 after which various ancillary works and site validation will be undertaken.

Find out more about the Platypus site in the http://www.harbourtrust.gov.au/planning-projects/platypus-project.